Robert Neville thinks he is the last man on earth in Richard Matheson's I Am Legend.

Robert Neville is described as a white tall male, thirty-six, born of English-German stock, his features undistinguished except for the long, determined mouth and the bright blue of his eyes..."

Not much is know about Robert's life, other than the fact that he was stationed in China "the War". He had met his wife Virginia and they had a daughter together. They both eventually succumbed to the virus. Somehow, he was immune to it from a bat bite in Panama, as it had a strain of the virus he calls "vampirus" and he began to become immune.

After the Pandemic[edit | edit source] 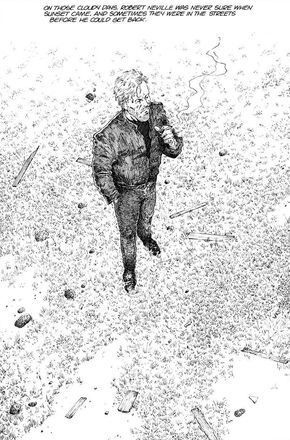 Robert Neville died some time in 1979 (In the Novel by Richard Matheson).

I Am Legend (film)[edit | edit source]

Retrieved from "https://iamlegend.fandom.com/wiki/Robert_Neville?oldid=3845"
Community content is available under CC-BY-SA unless otherwise noted.